Posting a comment online this morning made me suddenly hyperaware of the publicness of published writing. Publishing actually does mean, as I tell my students, making something public.

“Everything you write for a class, even if it’s disseminated no further than the classroom, even if I’m the only one reading it, is public writing,” I tell them. “Don’t tell me you just wrote it for yourself or attach a sticky note saying it’s just for me. Assume that whatever you hand in may be made public. That it’s already public. It was public the moment you printed it up and put it in my hand or clicked ‘attach’ and then ‘send.’” 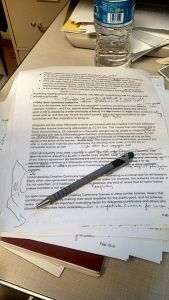 It’s easy to forget that writing is public, though. Consider Facebook, where people often post sentiments best kept to themselves. However tempting it might be to rail or even to agree—by liking it—with someone else’s railing, I generally restrict myself to happy birthdays, comments about good-looking photos, and commiserations with others’ suffering.

Today I was doing just that: commiserating with a friend whose autistic child had just “had a huge meltdown . . . complete with yelling, food throwing, and tears running down his face” in front of, as she wrote, “almost everyone I know.”

It was a wonderful post, as those who’d already commented said, because it was so frank. So, as my students say, “relatable.”

“Most of the time I suck it up,” my friend wrote, the “meltdowns, 10+ accidents a day, the stares, rude questions, the incomprehension on the faces of people around me, but today it was all too much, so I walked to the car sobbing my heart out.” She confessed, “it felt, somehow, like it was my fault,” and I sobbed too. For her. For her son. For sufferers of autism and their parents. For parents in general. Is there a more agonizing feeling than the unavoidable conviction that it’s somehow our fault whenever anything goes wrong—even something we didn’t cause and couldn’t have stopped—with a daughter or son?

It’s hard to respond to someone else’s pain in a way that doesn’t compound it, though. I learned that when, in the aftermath of a sexual assault at gunpoint, friends commented, among other intended condolences, that I was “lucky not to be dead.” I didn’t feel lucky and wished I was dead. Being told the contrary merely intensified those feelings.

I was thinking about that as I commented and (hopefully) didn’t make that error. Not this time, anyway—thanks to my best editor, the Holy Spirit, who, I’m convinced, translates our groans not only to God but to everyone else and (with some effort, in my case) bleeps our stupidest words. After telling her I’d cried, I advised her not to blame herself: she was doing the best and only right thing to do—loving her son—and doing it perfectly. So far so good, I thought—or anyway, I didn’t feel that tug in the direction of the delete key at that point.

I did feel it moments later, though, when I helpfully passed on a reassuring comment from a pastor’s wife eons ago when I was in the throes of parental shame about a problem with one of my toddling daughters: “God chose you, precisely you, for your girls,” she said, “because he knew you’d be the best possible mom for them.”

Sounds safe enough, I thought. And I was mightily comforted by that woman’s words at the time. God chose me to parent my girls. I was the best possible mother they could have. Everything was going to be fine.

But, as I say, the Holy Spirit apparently didn’t think so. In the fraction of a moment before I pressed enter, stories of parental abuse and neglect poured into my brain. A friend whose mom once told her children she hated them. Did God choose those children’s parents, too? What child, grown now but surely still suffering that meanness, might be reading my post?

The public is a tricky sea to navigate alone. Our kindest intentions, our most heartfelt theologies, have as much potential to mislead and hurt as to inform and uplift. Thank God for editors.

6 Replies to “In Praise of Editors”