Three months into this marketing plan, I’ve been able to avoid a nervous breakdown, work on the edits for The Aleppo Code, and Kregel Publications is about to launch its spring marketing for the fall releases. Now is the time to pick up the pace.

Newsletter – Send out at least one Newsletter each month:

(One of my goals for the newsletter as we get closer to the launch is to use contests or other vehicles to tie the three books together as THE JERUSALEM PROPHECIES series … accelerate the idea of people thinking of them as a series.)

March – Contest: Guess two of the main scene locations used in The Aleppo Code. Some of the scenes in the first two books were The Collector’s Club and the Humanities and Social Science Library on Bryant Park, NYC; The Western Wall and Zechariah’s Tomb, Jerusalem; St. Anthony’s Monastery, Egypt; Cairn T, Loughcrew, County Meath, Ireland.

June – Contest: What is The Most Powerful Weapon the world has ever seen?

July/August – Unveil the cover of The Aleppo Code.

October – Launch date for The Aleppo Code – create some tie in to ‘Midnight Madness’ … at midnight of launch day, the first 12 people who send me an email get a free autographed copy of The Aleppo Code.

Tasks For Me to Tackle:

(One of the great commitments Kregel has agreed to is to strengthen the blog tour for the Aleppo Code. Under consideration is a blog tour that provides all three books for the reviewers, so they can follow the story arc of the series.)

I’ve learned a few things from creating this marketing plan and then trying to implement it. One, this marketing stuff takes a real commitment – and a lot of time. Two, it’s worth it. And, three, the work doesn’t end once the book is launched. Great … when do I get some sleep?

Have you ever developed a marketing strategy like this? What was the most successful thing you did?

How to Breathe Life Into A Back-List

I’ve never been much at the marketing side of this writing business … and I was born in the wrong generation to be adept at social media.

But I knew I had to do something out of my comfort zone. My first book, The Sacred Cipher, is still going strong after five years. Sales for its sequel, The Brotherhood Conspiracy, are disappointing. With the third and last book of the series, The Aleppo Code, due for an October launch, I needed to get to work.

So I proposed a year-long marketing plan to my publisher, Kregel Publications, and asked for their support and participation. This is what I proposed for the first three months:

The Marketing Plan – December thru February:

What Was I Willing to Do?

What Was I Asking Kregel to Do?

(A lot of these requests were not practical. The marketing staff at Kregel explained that it would be too confusing to make changes to the covers of the E-Books on Amazon or Barnes & Noble but not be able to make any changes to the printed books already in circulation. But they did agree to create Back Ads (pages inside the books promoting the other books in the series) in The Aleppo Code and – if it goes to another printing – in The Sacred Cipher. – Terry)

(The entire E-Book promotion I asked for in February has been moved back to coincide with the launch of The Aleppo Code. The marketing staff at Kregel explained that there is a law of diminishing returns with E-Book promotions. They did one a year ago for both books and believe postponing the E-Book promotion until the fall will benefit all three books.)

February 6th: Accelerating the Pace Down the Stretch.

When I saw the marketing plan that Terry Brennan had put together for book #3 in his series, I knew others had to give it a long look. This plan has some remarkable forethought to it. It’s aggressive, thorough and … I think it’s going to work to help create awareness of his new book, as well as move copies of his previous book. If you’re a traditional or independently published author who has or will have a trilogy, keep this post handy.

When a Series Didn’t Start That Way

I’ve been fortunate and blessed to have two novels published and a third one on the way. The Sacred Cipher, published in 2009, has done well. It appears the book may soon go to a third printing and today, five years later, people are still picking it up – and posting their reviews on Amazon. The sequel, The Brotherhood Conspiracy, was released in 2013. It got a great review in Publisher’s Weekly and better reviews on Amazon than Cipher. But sales have lagged.

One reason is that I was very ill at the time of Brotherhood’s launch (I’m fine now, thanks). Another is that neither I, nor Kregel Publishing, knew this would be a three-novel series. It just started out as one book. So it wasn’t marketed as a series and Brotherhood hasn’t benefited from the “pull” that Sacred Cipher generated.

Since I have a personal stake in the success of these books, and a lot of years invested in them, I want to do everything I possibly can to promote the increased sales of The Sacred Cipher and The Brotherhood Conspiracy, particularly in anticipation of the launch of The Aleppo Code in October – the third and last book of the series.

How Do I Connect These Books? 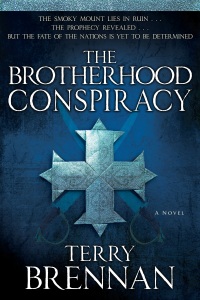 I created for myself an aggressive one-year marketing plan starting in December, 2014. The plan includes a month-by-month listing of what I will do to help accelerate the sales of the first two books, including a commitment to create a consistent social media presence, to produce a monthly newsletter (I have over 1,000 active email addresses in my mailing list) and to personally undertake a series of other marketing initiatives over the next year.

I included in that plan some requests for Kregel to join in this marketing effort. The team at Kregel has been wonderful to work with over the past several years and I deeply appreciate all they have done to support and promote my books. It’s been a great partnership and, because of that relationship, I believed it was acceptable to include some requests for additional support from Kregel.

Essentially, the requests of Kregel fell into two buckets:

There’s No Harm in Asking!

I was thrilled when Kregel responded to this marketing plan, and my requests, with four major initiatives they were willing to undertake:

I’m told this is an unusual step for a publisher to take to invest promotional resources into back-list titles. Bless them that they did. Now it’s up to me to implement and fulfill the elements of the marketing plan.

February 4th: What the first three months of the plan look like.