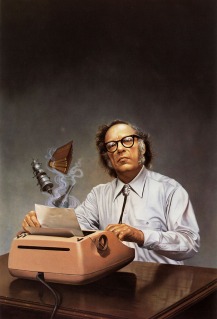 Samuel Johnson, the 18th Century Englishman who penned the first dictionary of the English language said this of writing.

“A man may write at any time, if he will set himself doggedly to it.”

There is a lot of wisdom in this statement. I believe the main thing which separates successful writers from would-be is that most people who think they can write don’t have the stomach for it. Just like any other enterprise of worth it involves hours and hours of hard work.

On the radio this week I heard the story of two 12-year-olds, swimming hopefuls both of them outstanding athletes. The young boy said it was his dream to swim for Great Britain in the Olympics in 2012. The young girl said she had the same dream. The boy talked a lot about winning a gold medal. The girl got stuck into training. Five years later the young girl, now 17, has been picked for the GB team and she has a good chance of getting a medal. What about the boy? Well he’s still talking about winning, but he hasn’t even got a spectator ticket for the event. He dropped out of training long ago.

Here’s a quote from the Novelist Doris Lessing, “I don’t know much about creative writing programs. But they’re not telling the truth if they don’t teach, one, that writing is hard work, and, two, that you have to give up a great deal of life, your personal life, to be a writer.”

“The only difference between a writer and someone who wants to be a writer is discipline” Ayelet Waldman.

Bah humbug! Discipline, the bane of all who want to be a success overnight, can’t I just have it all without the discipline, the work, and the misery?

We all know the answer to that question. Lee Iaccoca said “The discipline of writing something down is the first step towards making it happen.”

Ernest Hemingway used to get up at dawn and write until lunch time then enjoyed his afternoons not writing. CS Lewis had a daily schedule which he kept to and that meant writing 4 hours in the morning and 4 hours in the afternoon. Jean Plaidy wrote 5000 words before lunch. Graham Greene did only 500 words a day, but look at the output. Isaac Asimov awoke each morning at 6 AM and worked well into the night, sometimes churning out entire books in a matter of days, amazing, but not for me.

Whatever your plan is just keep to it, doggedly, and then one day you’ll walk past a book shop with your own creation smiling proudly in the window.

I love this from Harlan Ellison “People on the outside think there’s something magical about writing. That you go up in the attic at midnight and cast the bones about and come down in the morning with a story. But it isn’t like that. You sit in the back with a typewriter and you work. That’s all there is to it.”

I leave you with this quote from your own John Adams, which is good advice to any writer.

“Let us dare to read, think, speak and write.”

How do you maintain discipline in your writing life?

26 thoughts on “Keep Doggedly at It – Writing That Is!”