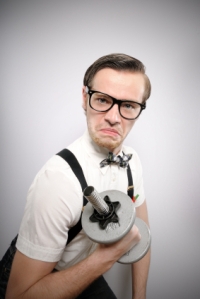 Sometimes I have to remind myself I’m not Ernest Hemingway, allowed to take hours at a time sipping aperitifs and people watching in Paris before I muster the requisite inspiration to sit down and write something. My goodness, if I did that and my husband subsequently found out, he’d feverishly protest the abundance of chicken nugget nights that seem to bottleneck when I get close to a deadline.

On the first manuscript I completed, however, I remember only writing when I felt like it. It took me two years to finish. And when it was summarily dubbed “Good, but not quite there,” I responded in a few ways. First, there was the shaking of my fists in the air. Second, there was the stint of self-loathing. (Which as a writer, I feel I have a natural right to exhibit, prancing back and forth, moaning, as if I’m original in my pain.) And third, an issuance of a new battle cry: I will never waste that much time again.

Two years of my life back then was the difference between a head of my own black hair, and a bottle of L’oreal Black Midnight to cover the greys that had suddenly popped up. When I began working on my next manuscript, I forced myself to work every day, for a set amount of time, or a set amount of words.

In my day job as an attorney, I have no problem writing piles and piles of drivel . . . I mean, well thought, and well-argued points of law . . . in a quick, methodic manner. Shouldn’t I be applying the same work ethic to a manuscript? And when I did, I wrote 120,000 words in just over two months. Of course, I have to give some credit to the story being an easy tell, but I give more credit to the fact I determined to make it a work task rather than a pipe dream.

I wanted to develop a rhythm with my writing, a habit if you will, that would self-execute even when—get this—I didn’t feel like it. And sure, sometimes I had whole pages that looked as presentable and appetizing as the floor of a gas station bathroom, but that has happened on occasion when I was trying my best.

When you train a muscle to work, when you exercise it daily and watch it tone and tighten, there’s this mental assurance that the next big set of weights—the next writing task ahead—is within your range. Further, if you work those muscles hard enough, they’ll keep working for you, burning for you, long after you put the weights down. They’ll even keep you going on days when you don’t feel like working at all.

Bottom line is that writing doesn’t come and go in these magical, muse-driven spurts, as if some wayfaring pixie is sprinkling special dust and making you transcend. It’s a muscle begging its owner to use and improve upon it. Getting it to its optimum is going to take you gritting your teeth. You may even have to pop out a neck vein here and there.

And once that’s done, you can pull out the Hemingway routine during your next vacation or when you’re trying to be aloof for your friends. That’s always a fun gig.

41 Replies to “Writing is a Muscle, Flex it”