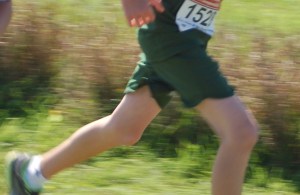 Crisscrossed with knee-high boundaries of grass, the field stretched far below the hilltop. To the distant right, the sound of a fast-moving four-wheeler buzzed louder until I saw it speed toward the horizon, followed seconds later by a skinny-ing mass of runners.

Along with all the other camera-laden parents, I  darted across the fields, staking strategic positions to capture my son rounding a corner or blazing down a hillside. I hurdled boulders, pushed through sluggish throngs, and catapulted my rattling, aging body from one carrefour of the course to another.

When my runner passed by, I whooped.

I scurried across the field to the next junction to cheer him on some more.

Hundreds of spectators gathered to watch the state middle school cross-country championship. Hundreds of kids flashed by. Yet within that undulating motley horde, I found and locked eyes with my son.

The corner of his mouth turned up when he saw me.

He lengthened his stride.

And I scurried to the next junction to cheer him on again . . . until I met him at the finish line, red-faced, breathless, and satisfied. 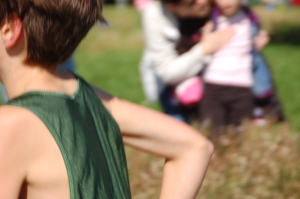 We’re not unlike these cross-country runners, you and I, especially if we feel called to write for the Christian market. After returning from the 2011 ACFW conference, I spent days processing not only that event, but also my writing journey as a whole. I argued with my muse, re-evaluated my purpose, and gasped for clarity amidst the torrid winds of the publishing industry.

Until I watched my sons race last weekend.

I remembered running up the hill of uncertainty after taking years off writing to focus on parenting.

Around the corner was an industry professional who said no to a query, but invited me to Mount Hermon, where my heart for Him and writing collided like a flare on a pitch black highway.

I rounded the craggy corner of tens of rejections.

Then I “happened upon” a newspaper editor who just “happened to need” a new weekly columnist.

I fell behind, distanced from hope by whispers that no one needs or wants to hear my pathetic story or craftless words.

On the back stretch I caught sight of the waving arms of a friend who led me to my agent.

I lost sight of other runners sprinting ahead of me, pouring out multiple books a year, and I wanted to give up my goal to publish even one.

Around the next bend, a blog reader commented that the words on my website changed her life.

I coveted the bold, new uniforms of other runners and wondered if I should water down or change my message.

A fan on the sideline told me how a Christian book by a Christian writer saved her husband’s soul.

We are in a race, we faith-focused writers . . . a race to make Him known . . . a race to further the inbreaking of His Kingdom . . . a race beckoning us to finish hard, finish well, and finish strong . . . no matter where we fall in the pack.

And around every corner . . . along the loneliest stretches . . . down the effortless hills and up the steepest inclines, He runs to meet us . . . to cheer us on . . . to lock our wandering eyes upon His countenance above all others along the swarming sidelines.

“Do you see what this means—all these pioneers who blazed the way, all these veterans cheering us on? It means we’d better get on with it. Strip down, start running—and never quit! . . . Keep your eyes on Jesus, who both began and finished this race we’re in. Study how he did it. Because he never lost sight of where he was headed—that exhilarating finish in and with God—he could put up with anything along the way . . . ” (Hebrews 12:1-3, TMV)

Where have you felt God’s presence along your race course? How have veteran Christian writers inspired you? When have you heard Him whooping and hollering, redirecting your steps and restoring your focus on Him?

54 Replies to “Strip down and never lose sight”