One consistent problem most writers – new or seasoned – have when they’re developing their stories (present company included!) is to bring enough conflict into the story.

It’s normal to want to protect our characters from conflict. We like these people. We want them to have happy lives.

But do you know what you get when you give your characters happy lives that are free from any conflict? That’s right.

You need to bring conflict into their lives!

The first thing to remember is that conflict can be defined as goals that are blocked or defeated. So before you can have conflict, your character needs to have goals.

I hope you’ve all heard of Debra Dixon’s book, Goals, Motivation and Conflict. That’s a great place to start learning to develop your character’s GMC.

Conflict in the back story

As I develop my characters’ GMCs, I begin to discover their back story. What happened in their past that is affecting them now?

For example, in the proposal I’m working on now, Samuel and Mary’s story, Mary and her sister move from Holmes County, Ohio to Shipshewana, Indiana to live with their elderly great aunt. But why would they move away from home? What is at home that they want to get away from?

It has to be a conflict strong enough to force them to take this life-changing step. For Mary, it’s a tragic event that happened to her two years earlier.

A Conflict within the story for each character

So the next step is to find Mary’s story conflict. I had to ask myself: What is the worst, the absolute worst thing that could happen to my character? 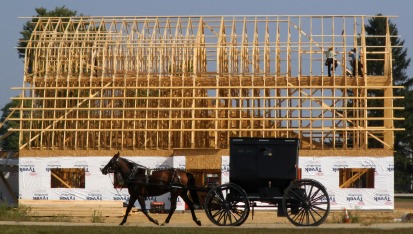 In my proposal, Mary’s past tragic event is that she had been attacked by a man two years earlier, and since then the attacker has been threatening her and intimidating her–blackmailing her into keeping his secret.

So what is the absolute worst thing that could happen to Mary? That’s right. Her attacker finds her in Indiana and starts the intimidation and threats all over again.

The story conflict is more powerful if it has ties to a past conflict in your character’s life.

Of course, both characters need to have a conflict, so you need to do this exercise for both your hero and your heroine.

In my proposal, the hero, Samuel, is an alcoholic. He’s fighting his addiction throughout the entire story. That’s his first level of conflict.

His battle becomes much worse when he feels inadequate, threatened or guilty. When he sees Mary with her attacker, he assumes that they have a romantic relationship. That’s the next level of conflict for him.

But when he finds out he’s wrong and Mary is in danger from this man, he faces the “dark night of the soul,” the Black Moment, and is on the verge of taking that drink he’s been fighting throughout the story…and the conflict tension ramps up.

Your characters’ individual Conflicts work against each other, driving your hero and heroine apart

Ramping up the tension raises the stakes; the characters’ relationship is in danger.

Samuel’s alcoholism and feelings of inadequacy make him pull away from Mary just when she needs him most.

Mary’s fear of revealing her secret–and of being close to any man–makes her pull away from him just when he needs her most.

I want my readers to question how these two can ever overcome their conflicts and have a happily-ever-after ending!

Are you guilty of letting your characters get off easy? What can you do to help ramp up the conflict in your story?

Jan’s newest book is “Hannah’s Choice,” the first in the series Journey to Pleasant Prairie from Revell Books.

6 Replies to “Conflict: The Heart of Your Story”