When I first began going to writers conferences around 2003, vanity publishing (where you pay someone to produce your book) was considered only a dire writer’s avenue to get his poorly written manuscript to the public. These novels were not given any credit by publishing gatekeepers (such as editors, agents and book reviewers.) 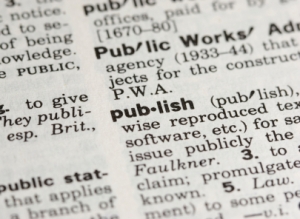 Vanity publishing morphed into several forms to what is now the indie industry. There are still vanity publishers who will take your money and produce your book. However, indie publishing is where the author becomes publisher– hiring freelance people for all facets of book production but they remain in control of their product.

Over a decade later and the attitude surrounding indie publishing has changed a lot. Though some still hold the above attitude, it is diminishing, and self-publishing is no longer considered the last nail in a writer-wanting-to-be-an-author coffin.

A few years ago, I attended a talk given by well respected literary agent Rachelle Gardner, a self-published author herself whose book highlights traditional vs self-publishing. She gave a talk touting some of the benefits of pursuing self-publishing and in some instances considered it a bonus to an author’s career.

What?!? Yes, that screeching sound was both my feet hitting the brake pedal.

The dizzying pace of these changing attitudes in publishing can leave an author scratching his/her head.

Personally, I’ve seen several close friends pursue indie publishing and have moderate success. By this I mean they earned back the money they invested in preparing the manuscript (for editing, the book cover and interior design) and perhaps have earned a couple of thousand dollars. A smaller minority had great success and went on to further get traditional publishing contracts.

What I’ve determined is that there is a good time and place to consider indie publishing as an author, and here are some of those situations to consider.

1. You have a polished manuscript but it can’t find a home with a publisher. First, I want to qualify what I mean by a polished manuscript. This is much, much more than finishing a rough draft that your mother and friends slobber over. They’re not good book critics because they love you and don’t want to hurt your feelings. It means that it’s been professionally edited, at least twenty people outside of family (and are familiar with books, genre, and good writing) love it, and maybe your agent even shopped it around but it couldn’t find a home. An even better indicator of this caliber of manuscript is that it has finaled in a well-respected writing contest like the Genesis Contest sponsored by ACFW. It takes six to ten years to learn the writing craft and a couple of written books under your belt to fit this definition.

2. There will be a delay in books releasing between your traditional publishing contracts. What I’ve heard and read is that it also takes six to ten years to build a readership. During that time frame, it’s wise to have a book releasing no longer than once a year. Some authors do more—some do less but you want a predictable stream of novels to keep readers’ interest piqued.

3. You are a control freak. Creatives like control over their product. Publishing is not that way. It is a collaborative effort so some of what you love about your creation is going to change. Some people enjoy all aspects of the book publishing process and want to have final say over every aspect—going strictly with their vision. Self-publishing is the best venue for the author to maintain total control. You also have to front all the cost and carry the entire burden as well for marketing and distribution.

4. You want to maintain your rights. When you sign a traditional publishing contract, your book is no longer really yours—in a sense. The publisher owns it in certain formats (maybe even all formats) and most often times will have clauses in your contract on other avenues they have the option to pursue—like hard cover large print rights. Some authors don’t want to give this up but then, as in the above, you’ll also be the one to try and negotiate selling the rights in different formats if you choose.

5. You want to write in other genres. Most often, an agent and traditional publisher are going to encourage you to stick with one genre but few authors I know really want to do that for their entire writing career. These might be good novels to self-publish under a pen name. Even this attitude is changing as well. Many authors I know are writing in multiple genres using the same name and don’t seem to be suffering for it.

6. You want to build volume more quickly to increase income. The flip side of building a readership is how much material you have to offer. When my first novel released, if the reader loved it, there was nothing else for them to read. Now, if they love any one of my books—they have at least two others to choose from. The more books you have, the more options a reader will have to choose and buy another book of yours to read—thus increasing your potential earning income.

What do you think? Have you indie published? Did you consider a success? Would you do it again?

2 Replies to “When is it Good to Indie Publish?”