First things first:  Yes, I met Dr. Dobson.In real life. And, yes, he was kind and wise and funny and smart and everything I expected him to be and more. I flew up to Colorado Springs in April, 2013 to be a guest on Dr. Dobson’s Family Talk radio show. In the studio, we chatted about families, about writing, about my books, and then recorded 3 1-hour segments to air on June 5-7, 2013. (Click here to see where you can listen in.) And, in the process, I not only gained invaluable insight on motherhood, marriage, and family from one of the most amazing theological minds of our generation, but I also learned about writing as well. Here’s what I took away from this meeting. 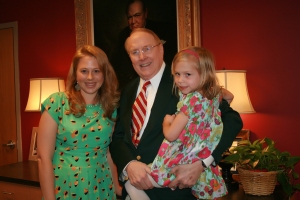 1. Actions Speak Louder Than Words.  Dr. Dobson’s life’s work and focus has always been on helping Christ-centered families. And I don’t think anyone in the world would argue with me if I said that he has passionately and wholeheartedly given his career to this goal. This is a great thing. I have to admit that part of me expected our visit to be something like a college-course lecture. Instead, he pulled my five-year-old daughter onto his lap and talked to her. And he showed me without saying a word that he values children and family and motherhood in a way that goes beyond words. I learned that if I want to talk the talk in my writing and on my blog, I had better be willing to walk the walk.

2. Listen With Open Ears.  Dr. Dobson knows his stuff. The guy is legendary—well-read, well-educated, well-just-about-everything. And the truth is that I knew there was nothing I could’ve said to him about parenting or motherhood that he a) didn’t already know and b) hadn’t already covered in his own writings. But Dr. Dobson listened to my words wholeheartedly and willingly—even on topics that we didn’t necessarily see eye-to-eye on. He showed me respect by looking me in the eye and allowing me to voice my opinion. And I left in awe of his incredible wisdom and kindness. No wonder he has made such an impact on our world! He is willing to listen with open ears and to show respect with a gentle kindness—even to those who are “below” him in status or who have different opinions than he does.

3. Don’t Be Afraid to Put Yourself Out There.  I wish I could tell you that I did something to earn myself a spot on Dr. Dobson’s radio show. I wish I could tell you it was on my merit, that I did something extraordinary, that I am an amazing radio speaker, that my writing is just that inspiring…but I can’t. Because the truth is that I did nothing. I threw myself out there by having my publicist send my book to Family Talk’s studio…in 2011. From there, God worked behind the scenes to inspire the right producer at the right time to pick up the book. As authors, we have to do everything we can to get our books “out there,” but after writing and marketing five books, I’ve learned that God is the one who opens those doors. We just have to be willing to walk through them.

4.  Don’t Be Afraid to Ask.  I was thrilled the day I got the call from Dr. Dobson’s producer that I was going to be on his show. And I knew it was an important break in the marketing campaign for my new books. But I had also made myself a promise way back when my oldest was born: I was never going to let my career take me away from my kids for an extended amount of time. And while I desperately wanted to go on the show, I also struggled to decide if was a good idea to leave home for three days at the end of the school year. I prayed and picked up the phone and asked the producer if I could bring my daughter along. And she bent over backwards to make it happen. They reserved a room for me with two beds. They helped me book airline tickets. They found me a big-enough rental car. And the entire staff at Family Talk showed my daughter incredible kindness and love while we were there. My point? Don’t be afraid to ask. I know it wasn’t easy for them to have a five-year-old in the studio, but it was important to me. Dr. Dobson’s organization lived up to their reputation of being advocates for family by helping me make it happen.

5.  Be Willing To Be Flexible.  I went into Dr. Dobson’s studio with the expectation that we were going to record one hour-long segment. I walked out having recorded three. We had a flow going and had so much to talk about that we just kept recording. The studio session took much longer than expected and…shockingly…we got stuck in a snowstorm afterwards (a snowstorm in April? Apparently this is normal only in Colorado). Anyway, writing and marketing is an inherently liquid task—and only by being flexible to roll with the changes—ups, downs, twists, and turns—will we be able to see and succeed in the long-haul.

What have you learned about writing from other (famous) authors or radio personalities?

Erin MacPherson is the author of The Christian Mama’s Guide series.  She’s also a mommy blogger, amateur chef, and (very) amateur runner.  She blogs at www.christianmamasguide.com.

8 Replies to “Five Things I Learned About Writing/Marketing from Dr. James Dobson”