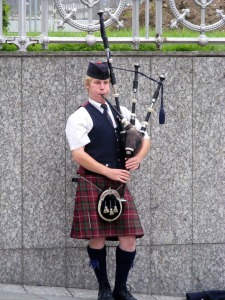 Creativity isn’t just a good idea but mandatory if you want to be a writer worth your gold (way more valuable than salt nowadays). The thing about creativity, though, is that you must be careful with the details. Why?

Because there’s a fine line between creativity and believability.

Recently I received an email from a cyber buddy that read:

“I’m writing this with great grievance. I’m presently in Scotland, United Kingdom, with my family for a short vacation and we’re stuck. And really it was unannounced. We were attacked by four armed robbers on our way back to the hotel where we lodged. Not only were we robbed, but are completely embarrassed.

All our cash, credit cards, and cellphones were stolen. We’ve reported the incident to the embassy and the police, but to my dismay, they seem not bothered…their response was just too casual. Our flight leaves in a few hours but we’ve got to settle our bills before we’re allowed to leave. Now I’m freaked out.

Please, I need you to loan me some money. I promise to refund you as soon as I’m back home. All I need is $1,650. Please let me know what you can do. Write me back so I can tell you how to get it to me.”

Now then, as you’ve likely figured out, this is indeed a scam—but a scam that might’ve worked a whole lot better had they paid attention to minor details. Let’s pick it apart, shall we?

From a creative standpoint, I’ll give this a 3 out of 5 stars, mostly because whoever wrote it upped the ante by adding in the ‘armed’ in front of robbers. Nice touch. I also like how the author included a ‘ticking time bomb.’ The plane leaves in a few hours and their bills must be paid or else. Will they make it out of the country? Cue dramatic background music.

So those details totally work. What threw the story off was a single believability factor toward the beginning that instantly set off the needle on my are-you-kidding-me radar.  She’s presently in Scotland? Sheesh! Scotland implies rolling hills and kilts, not roaming bands of AK47 toting thugs. Maybe if the author had said they’d been threatened with bagpipes I’d have bought it. Nah. Even that wouldn’t have worked.

The creativity was there, but the details didn’t match. Why? Because Scotland doesn’t fit the connotation of a lawless land where desperadoes rob innocent tourists.

Next time you’re in creative mode, crafting an intense scene, make sure your details enhance the story instead of pull your reader out of the action. Losing a wallet is one thing…you can always earn more money. Regaining a disappointed reader is harder than learning the bagpipes.