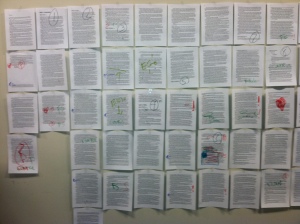 It’s awkward offering advice in a blog post when your advice is to ignore the advice in blog posts.

But that’s exactly what I’m proposing for fellow writers — at least sometimes.

The problem isn’t that there’s a lack of good advice in such posts. I love nothing better than reading some “Ten-Ways-to-blah-blah” post and finding the suggestions so helpful that I immediately implement half of them.

The problem is that, in this age of easy information, we don’t think enough for ourselves. That we see ourselves as consumers of others’ creativity and not inventors of our own. That we leave too much of the imagination to someone else.

Long ago, I had the privilege of writing a piece for Sports Illustrated on Dick Fosbury, the 1968 Olympic high-jump gold medalist. “Foz,” as we Oregonians dubbed him, was a gangly, uncoordinated high school kid and self-admitted high-jumping failure.

Then he got the audacious idea to scrap the traditional “Western Roll” style of jumping. Instead, he did something nobody had done before: he soared over the bar backward, face to the sky, legs bent as if dangling over an exam table.

By literally turning his back on the establishment, Fosbury revolutionized high-jumping; since 1968, virtually all jumpers have adopted his style.

That never would have happened had Fosbury not dared to be audacious and think for himself instead of simply settling for “the way everybody else does it.”

But isn’t that how most of us write, edit, and market — based on others’ advice?

It is for me. Then, every now and then, desperation—the same thing that fueled Fosbury’s “about face”—triggers my own creativity.

The rough draft of my nonfiction book about the first World War II nurse to die after the landings at Normandy had become so unwieldy I couldn’t see the forest for the trees.

I’d written the 70,000-word book on an 11-inch laptop and I realized I had little idea of what it was long on and short on.

Conventional wisdom whispered: Let a handful of perceptive editors weigh in—and, ultimately, I would do that, of course. But I wasn’t ready for that step just yet. I needed some way to see into my story. To be in my story. And then the idea struck.

I printed out the book, double-spaced. I used colored felt pens to mark nuances I wanted to make sure were spread consistently throughout the book: dialogue, foreshadowing, action, what war smelled like and sounded like, in addition to the standard “what it looked like” perspective. And more.

A newspaper columnist at the time, I then slapped all 250 pages on three walls of our office’s photo studio—picture a dark-walled racquetball court—and, bingo, I was, indeed, inside my story. Literally.

With this perspective, I could see I had Mojave Deserts of dialogue dearth. I went chapters without letting readers hear the sounds of war. I had some chapters far too long, some far too short. I found all sorts of adjustments that needed to be made.

Never mind that nobody else but me could decipher my felt-penned hieroglyphics. In half a day—and despite a few smirks from newspaper colleagues—my mind’s focus went from fuzzy to sharp on what my book needed.

The experience opened me to other self-invented ideas to help my writing, from walking around the block while doing long edits (exercise, baby!) to discovering the gold mine of information that used bookstores offer and the Internet never will.

Among the best lessons I learned while doing the 452-mile Oregon portion of the Pacific Crest Trail (Cascade Summer) was this: hike your own hike.

There. Now, feel free to ignore all the aforementioned advice and come up with something better yourself.