Writers, have you ever participated in a street fair?

I recently had the opportunity to represent local authors through Read Local San Diego at the Encinitas Street Fair. The total cost of the booth for a couple of days was $300.00, broken out into time slots for authors to utilize at the price of $25.00 for a two hour period. Considering that literally thousands of people attend the annual Encinitas Street Fair (situated two blocks away from the Pacific Ocean), it was clearly a cost effective way to gain exposure in the community.

Parking nearby was out of the question. My husband was good enough to drop me off near the booth, using back roads to weave in and out. Realizing this would be the case, I took a roller bag with wheels to carry my books, a desk easel to display my books at the booth, several pens, a pad of paper, and a set of business cards. As far as the number of books, they suggested at least five, so I brought twenty. Next time, I’ll go with around forty or fifty. I pre-signed the books with a “hope you enjoy the read” type message, so I could quickly fill in people’s names and the dates and facilitate the process.

There were three other authors at the booth with me. We had two six-foot tables, with two authors per a table. “Oh, you’re here,” my table mate said when I arrived about five minutes before our shift began. “I was about to take over your table space.”

I became acquainted with him and the other three authors in my shift. At first, none of us were sure of how to engage the throes of people walking by our booth. One author called to people like a carnival barker, offering a chance to win one of his books if people would fill out a slip with their email and mailing addresses. Most folks, there with the intention of being out for a stroll and buying no greater purchase than a funnel cake, weren’t too receptive to this approach. The four of us did some brainstorming and giveaways seemed to be the way to go in this environment. I gave away free signed copies, asking for an honest review on Amazon in lieu of payment. That seemed to go over pretty well. In each book, I placed a business card with my contact information on one side and my book cover on the other side.

Next to our booth was a fifth local author, a gentlemen of a certain age who writes for the Young Adult market. He has quite a following and teenagers kept coming by throughout the day to say hello to him. He has nineteen books to his credit and required his own booth. He is an adjunct professor at a local university and asked if I would like an opportunity to speak and / or teach. The street fair was proving to be a good opportunity to interact not just with the public, but with like-minded authors. 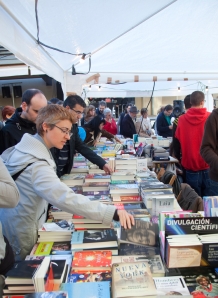 During the slow moments of the shift, our group compared notes and talked shop. An elderly man in the group who was intimidated by social media went home with an education about how to use Twitter. One lady needed a reasonably priced editor and received a referral. Another writer needed a graphic artist referral for book covers, and was given several suggestions. I became familiar with the San Diego Writers Guild and started looking into their upcoming meetings.

We also worked as a team, which was fun. If someone approached an author whose book wasn’t their cup of tea, then there were four other writers of very different genres available to meet. Several authors had huge display posters with the covers of their books. They said these can be ordered online, and all one has to do is send in the content and a digital file. We learned that coffee and books and wind are not a very smart combination. We learned that a roll of duct tape is imperative in order to fix issues such as crooked signs or tent tables that needed more infrastructure. Bringing a box of pens and having a way to make change is also advised.

All in all, a street fair is probably not going to yield thousands of sales, unless the fair specifically focuses on books. Most people going to a street fair may not have books on the mind, but it is a wonderful networking opportunity, and you just can’t beat the exposure for the price. You may want to check out street fairs and rental booths in your own area, because people really do like to support local businesses, including their local writers and authors.

Have you had any experience with street fairs or book expos?

Any suggestions on how to best leverage this kind of marketing approach?