Working on my most recent book, Wheels Stop: The Tragedies and Triumphs of the Space Shuttle Program (University of Nebraska Press 2013), changed my life forever.

The date was June 22, 2010, and research for Wheels Stop had led me to Johnson Space Center in Houston. Astronaut Doug Hurley was kind enough to invite me to do a run on the Space Shuttle’s motion-base simulator, an ultra-high-tech contraption that tilted upward to simulate the launch position, and then shook and rattled to prepare astronauts for the ride uphill. 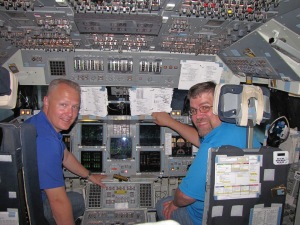 Although I was smiling alongside astronaut Doug Hurley (left) in the Space Shuttle’s motion-base simulator, my heart was broken. A major life change was already beginning to take place.

I couldn’t wait to take him up on it. I have dreamed of being an astronaut my entire life — my last name is Houston for crying out loud — and this was as close as I would ever get. Slowly, I fastened four of the five safety harnesses as we prepared for the run. The fifth belt refused to buckle due to the size of my belly. It still hurts to think about that fifth seat belt even four years later.

This wasn’t happening. I’d been embarrassed many, many times by my size, but never with an honest-to-goodness astronaut standing over me, trying to figure out a way to help. Doug never said anything ugly, but he didn’t need to. I was devastated, and becoming more and more so as I desperately tried to force the issue. My ribs hurt so badly, I could barely breathe.

Fortunately, we proceeded with the simulation of two launches and five landings. It should have been one of the most memorable moments of my career, and it was, but inside my heart was absolutely broken. I had to change something, and I had to do it quickly. My wife needs a husband, and my sons need a daddy. Heading the way I was headed, I wasn’t going to survive.

Rather than going on some crazy diet when I got back from Houston, I simply started eating like I had some sense. Chinese buffets were my absolute favorite, but they had to go.

Reese’s Peanut Butter Cups were were like my crack cocaine. No more. Not even half of one. Oreo cookies … country fried steak … it was once nothing to eat nearly two pounds worth of bacon and tomato sandwiches. I’ve never been drunk or high, but I know full well what it means to be addicted.

I could do one lap of a half-mile track near our local YMCA without feeling like I was going to break. Then, I could do two … and then four. I signed up to walk in my first 5k, and then I signed up for another. I took a class at the Y on how to actually train for a 5k, and ever since then, I’ve been running. More than four years later I’ve run seventeen 5ks, four 10ks, and three half-marathons. I’ve lost approximately 110 pounds.

Today, I’m satisfied with my weight. I’m not skinny by any means, but I’m happy with where I am. There’s nothing all that special about my story. Yes, I’ve been able to drop a significant amount of weight, but it wasn’t some super-secret diet or workout routine that did the trick. I was a writer who was almost completely sedentary behind a keyboard and computer monitor, and once I started moving, I haven’t stopped.

Trust me. If I can do it, anybody can. Working on your latest project is important, yes, but not at the expense of your quality of life. Hang in there. You can do it. I promise!

4 thoughts on “The Unfastened Safety Harness”